"I have been working with Remco for the past 6 years.

Finding a tech that is as passionate about equipment, set up, quality of signal and most importantly tone,

has been my god send.

Being able to completely trust another with the set up,

striking and maintenance of my equipment enabled me to give 100% of my energy to the performance.

Nothing has been more liberating. I know that my gear is in the best hands."

Thanks Remco for the Great work you have
profited to me

through a mutual friend (Nik Tongue - Visionary Guitar) at The Brisbane Guitar Show, and later bumped into him backstage at an Alice Cooper gig.

were he was the guitar tech for the support band syndicate

A couple of years later, and in need of some guitar set-up work, I gave Remco a call. He had my electric looking and sounding great, with me feeling like a million dollars, with every note singing as sweet as it should. Having never had my acoustic set-up properly, and somewhat disgruntled with the slight buzz I’d always encountered in a certain spot on the neck, I was truly amazed when I got it home and was strumming along with a new vibrant sound I’d never heard from the guitar before! Every note seemed to resonate perfectly, and the fret buzz was no more!

During one of my visits to Remco’s workshop, we began discussing some ideas I was considering regarding a pedalboard. Within a day Remco came back to me with the concept and a week later I was playing all my fave pedals connected (and nice and neat I must say!) utilising a GigRig switching system, powered with a power supply, on a board housed in a tough and sturdy road case.

Over the past couple of years, I’ve also been privy to, and witnessed Remco’s creative progress with the Mayer Guitars line and prototypes, wondering what he’s going to reveal during my next visit to his workshop.

Most importantly, Remco’s always been handy with sound and gear advice, and is always just a phone call away.

If you need some repair work done, or are looking for a new axe that’s a little different, or need help getting the sound you’re after, give Remco a call. After using many different people in Brisbane over the years, I’m glad I did, and now I’ve found I don’t need to be dealing with anyone else - Remco’s the man!

Remco thanks for fixing my guitar the action obviously was wrong since I got it at 18 ! It feels so different ! Thanks man 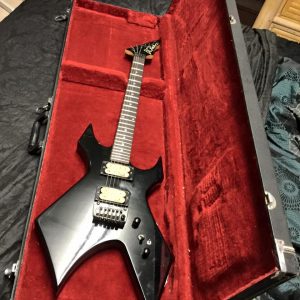