Who is Crossroad Guitars

During my career as a luthier, I have met many talented guitar players. I have also travelled a lot as a  a guitar technician.
I started working on guitars 20 years ago because the guitar that i bought was so bad setup that i did it my self.
I went to my then guitar teacher and he liked what i did and from there on i did his guitars and for many of his students.
From these beginnings steps in guitar setup and repair i started to work and learn with and from Danny Marcofish a master builder in Amsterdam The Netherland.
One day a stressed out guy came in to the shop with a guitar case and asked us if we could fix the guitar the head stock got snipped of the neck ,No problem leave it here and we will call you when it is ready , No No the guy said we need it for tonight's show we broke it yesterday in Parice so we asked him who does this guitar belong to then, turns out is was from John Petrucci from Dreamtheater some one dropped the guitar and the head stock snapped of from his 7 string Ibanez guitar .we fixed the guitar just on time to drop it of 5 min before the show started .
Over the years i have worked with many guitarist as there tech or just from my workshop in

and we even wend on tour to Singapore

Stuff from the past

Remco made arrangements with his contacts in the music industry to get the Dvd Disc that comes with your Australian guitar mag. 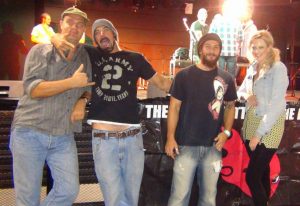 Here i am in the picture with Brad Carr,Phil Emmanual